Home > Journal > Helping wildlife by getting carried away

Helping wildlife by getting carried away

At the end of June 2015, we introduced a 5p charge for carrier bags in our stores. This has not only led to a reduction in the number of plastic bags issued by around 45% but has also re-directed cardboard boxes briefly away from the recycling bin as customers choose to reuse boxes for their purchases instead. The 5p carrier bag charge is donated directly to the Suffolk Wildlife Trust, a charity dedicated to safeguarding Suffolk’s wildlife and countryside. Over the past nine months, the charge has raised £2,900 for the Trust, which has put these much-needed funds into several important projects on the nearby Hen Reedbeds Nature Reserve. The Hen Reedbeds are situated just a few miles from Southwold, and almost every visitor travelling northwards to Southwold and Reydon would have driven through the middle of it over Wolsey Bridge. (Please slow down here – there are otters crossing!) Incredibly, these reedbeds, which look like they’ve been part of the landscape for hundreds of years, did not exist 20 years ago. Back in 1996, when the Trust first obtained the land, the area was used for grazing animals. The Trust’s vision was to create a habitat that’s becoming increasing rare on the British coast – a freshwater reedbed to provide homes and feeding grounds for key bird species such as the bittern, marsh harrier and bearded tit as well as for mammals such as otter and water vole.

As a dynamic environment, the coastline constantly changes and evolves. The eastern coasts of Norfolk, Suffolk and Essex are particularly prone to rapid change due to the soft, low-lying sediments that are easily eroded by storm events. In 2013, a storm surge broke through the river wall and flooded the eastern part of the Hen Reedbeds reserve with seawater, killing the freshwater inhabitants. Thanks to the quick-thinking of Reserve Manager Alan Miller (who blocked the sluice in the middle of the night with a bucket!) the western part of the reserve was saved. A portion of the money raised from the carrier bag charge is going towards funding a research project which aims to monitor the aquatic invertebrate population (which is currently a brackish community) in the eastern part of the reserve. As the saltwater percentage decreases, the saltwater species will decline, and freshwater species should begin to return and flourish. How long this transition will take is unknown, so the results on recovery time will be very valuable for other nature reserves which are likely to be flooded by saltwater in the future. Funds were also allocated to building new sets of steps down from the river wall on to the reserve. These steps are made from recycled plastic planks which cost three times more than wood but will last for at least 25 years as opposed to just three, so are well worth the investment. Finally, it is hoped that part of the money raised will help pay for some new animals on the reserve – some hardy cattle. The reserve is already home to three Konik ponies but cattle have slightly different grazing behaviours which will help manage the vegetation in the reedbeds and help prevent it reverting to woodland. It’s fantastic news that the carrier bag charge has helped fund some vital projects, and it’s equally great that we’re seeing a reduction in single-use bags. However, if you do forget your Adnams Bag for Life, or don’t fancy re-using a cardboard box, you can take heart in the fact that you’re directly contributing to nature conservation in Suffolk by paying 5p for your biodegradable Adnams carrier! If you’d like to visit the Hen Reedbeds, take the left turn directly after Wolsey Bridge heading towards Reydon and Southwold on the A1095. You can find out more on the Suffolk Wildlife Trust’s website. You can view photos of Adnams' Ben Orchard and Richard Carter visiting the reserve with Alan Miller and Michael Strand from the Suffolk Wildlife Trust on Flickr. 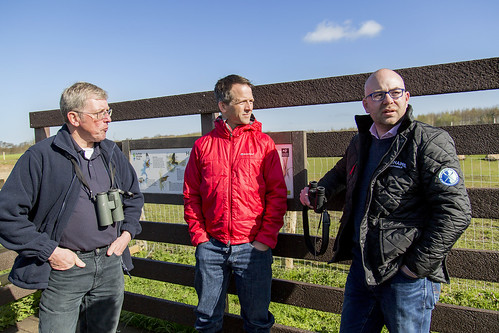 Spooky Tales From The East Coast